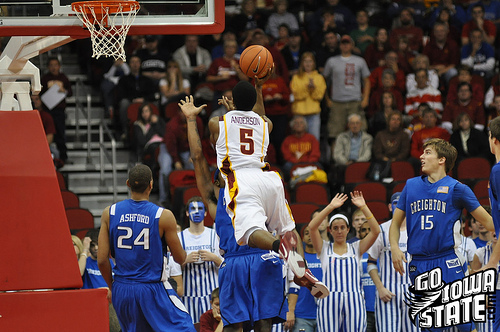 AMES – David Jones is starting to look like one smart dude.

This week, the Harrisburg Patriot-News sports writer put Iowa State in his Top 25. Others will soon follow his lead if the Cyclones keep playing like this.

Maybe for now, but Iowa State fans should start getting used to an exciting brand of basketball. The Cyclones are running and gunning their way past opponents and gaining confidence with each win. No, Kennesaw State (2-4) isn’t Kansas, but the way Iowa State dismantled the Owls was impressive nonetheless.

The Cyclones hit 10 3-pointers and made 55 percent of their shots in the rout.

“It’s definitely our spacing,” Freshman Melvin Ejim said. “After practice each day, we talk about spacing, and penetrating and kicking. That’s definitely why we’re seeing all these open shots and good looks at the basket.”

The game essentially ended when the Cyclones started and ended the first half on fire. Iowa State drilled its first six shots of the game to take an early 16-5 lead. Jake Anderson and Jamie Vanderbeken both hit 3-pointers during the stretch. In fact, Vanderbeken hit his first three treys of the night and finished the game with 11 points.

“It was very important that we built a lead so we could play our style of ball,” Hoiberg said. “We want to control the tempo every night we take the floor. The fact that we were getting out running and getting some good early shots and knocking them down, that allowed us to do that.”

The Owls did their best to get back into the game after the Cyclones’ hot start and even cut the deficit to 10 at 37-27. That’s when Scott Christopherson and Diante Garrett took over.

Christopherson started the decisive 11-2 run with a five-point possession. After Kennesaw State coach Tony Ingle was inexplicably called for a technical foul, the junior hit two free throws and drilled a 3-pointer to push Iowa State ahead 42-27.

Garrett followed with a great feed to Calvin Godfrey for an easy two and then made a driving layup for a 46-27 advantage. When the first half ended, the Cyclones led 48-29 to put any hopes of an Owls’ upset to bed. Iowa State shot 54.5 percent from the field and 53.8 percent from behind the arc in the first 20 minutes.

The only drama after halftime was how much the Cyclones would win by. Godfrey and Ejim took turns jamming the basketball as Iowa State built a 40-point lead on its way to victory.

Melvin Ejim is good – really good. The 6-foot-6 forward is explosive on both ends of the floor and can finish at the rim with authority.

Oh, and he’s only a freshman.

On Wednesday, Ejim tallied 14 points and 12 rebounds. The effort allowed Ejim to match his coach by scoring 10 points or more in his first five games as a freshman.

“Melvin’s been awesome,” Hoiberg said. “I knew that he was going to come in and make an impact, but he’s certainly exceeded my expectations.

“The thing I loved about tonight is that he had 12 rebounds. He really attacked the glass. There was a couple where he got the ball out and led the break – which he can do. I love versatile basketball players and he definitely gives us that.”

Ejim put on a show in the second half. His most impressive play came when he blocked a shot on one end of the floor and finished with a monster one-handed slam on the other.

“I thought I’d come in and play my part, and do what I had to do to help the team win,” Ejim said. “If this is helping the team win, then I’ll keep doing it.”

Iowa State is only five games into the season with a new coach, but the offense is already clicking. The Cyclones had six players score in double figures against Kennesaw State. Nine players tallied points in all.

“They are stepping up and shooting the ball with a lot of confidence,” Hoiberg said. “The way that we are sharing the ball, and as unselfishly as we are playing, that’s what’s giving these guys confidence. They know if they are in the right spot, they are going to get the ball delivered to them.”

Garrett keys the offense with his unselfish play. The Big 12 leader in assists dished out five dimes on Wednesday night.

“When you got so many type of guys that can get into double figures in points and rebounds, it’s difficult for the other team to guard,” Anderson said. “That’s the type of things championship teams do. That’s what we are trying to do here.”

The only bad news to come out of Wednesday night was that Royce White’s NCAA waiver was denied. White is disappointed, but if it’s any consolation, Hoiberg said he is absolutely tearing it up in practice.

“He is fully on board in this thing,” Hoiberg said. “He is excited about how the team is playing. He is going to continue to take pride in his role this year, which is playing on the scout team, getting our guys prepared to play. They kicked our starters’ butts yesterday.

“I can’t say enough about how well he has adjusted down here. In the classroom, on the court, he handles his business. He’s been a great addition to this team.”

Iowa State’s next opponent is no pushover. The Cyclones will host Montana State on Saturday at 1 p.m. at Hilton Coliseum.

The Bobcats will enter the game with a 5-1 record. 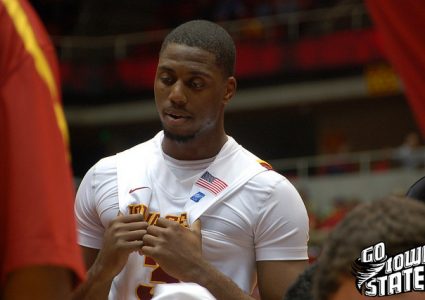