Look, they’re not the 1998 Chicago Bulls. Expectations aren’t necessarily going through the roof in Ames for the 2010-11 Iowa State men’s basketball team but still, Fred Hoiberg’s return to Ames has given fans a lot to look forward to throughout the summer and fall.

Take a deep breath basketball junkies. Hoops season is upon us. Here are five can’t miss games for this year’s Iowa State men’s basketball season, along with some other schedule-related tidbits as well.

On the surface, this one might not seem like it is that big of a deal. I mean, it is Northern Illinois from the Mid-American Conference. This bad boy doesn’t exactly scream "bracket buster" to the casual fan. Don’t tell that to starting guard Jake Andersonthough, who transferred to Iowa State from Northern Illinois in the offseason. Anderson averaged 10.6 points per game last season for the Huskies, who are picked to finish towards the tail end of the MAC’s West Division. Anderson led Northern Illinois in scoring as a freshman, when he averaged 12.2 points per game in 2007-08.

Kansas State, the preseason favorites (Kansas State got 10 of 12 first place votes) to win the Big 12 will invade Ames on Saturday, Feb. 5. The Wildcats likely won’t be happy either after Iowa State arguably knocked them off of a number one seed in last season’s final regular season game. Despite the fact that the majority of that Cyclone team is gone, I don’t anticipate Frank Martin letting his kids forget about that fact. Anxious for the return of Hilton Magic? How about a magical upset? This would be a cool one to win.

This will mark the “Mayor’s” first official game as Iowa State’s head coach. It is a contest that Iowa State should win. In a normal year, you’d think that a Big 12 team shouldn’t have much of a problem with a Big Sky team in its season opener. This isn’t really a normal game though. Not only is it Fred Hoiberg’s debut, but Northern Arizona is a solid, experienced basketball team. Get yourself familiar with the name Cameron Jones right now. Jones averaged 19.3 points per game for the Lumberjacks a season ago. He withdrew his name form the NBA Draft last spring and because of that, Northern Arizona is a popular pick to win the Big Sky Conference. This is a senior laden basketball team that Iowa State’s youthful roster fits. Friday will be fun. The “Mayor” has come back where he belongs. But don’t be surprised if you’ve chewed off all of your fingernails by the time you drive home.

Rivalry? This matchup has been far from it for the past four years. Iowa State and Iowa used to be a big deal. Be honest with yourself. Lately, this game hasn’t meant much of anything. Now both programs have new men in charge, as Fred Hoiberg and Fran McCaffrey will lock horns for the first time on Friday, Dec. 10 inside of Carver Hawkeye Arena. Like Iowa State, the Hawkeyes are a unanimous pick to finish last in their conference. Put all of that aside though. Bragging rights are on the line in this one. Which school made the better hire? Who will have the in-state recruiting edge? Most importantly, will people still care about this game? Many of those questions won’t actually be answered by the outcome of one game, but it sure would be nice for the Cyclones and Hoiberg to set the tone early on in this rivalry. This used to be the big non-con game of the season for both teams. My hope is that with the new blood that’s been injected into both programs, it once again will be.

This was a no-brainer. Greg McDermott and his new program vs. his former program. Duh. This game has more drama around it than the latest episode of “All My Children.” Still, I don’t envision that there will be much negativity in the air when these teams collide in Des Moines on that Sunday afternoon. McDermott left Iowa State on a good note. It was a solid move for his career and at the same time, he bailed out his good friend and former boss Jamie Pollard. How will Iowa State fans treat McDermott? What will be going through the minds of Diante Garrett, Scott Christopherson, Jamie Vanderbeken, Bubu Palo and the freshman who McDermott recruited to Ames? The best part is that this should be a very competitive basketball game. I expect Creighton to be a slight favorite on that day but keep in mind that one of their best players, Rutgers transfer Gregory Echenique, won’t be able to play until Dec. 18.

–       Iowa State’s non-conference schedule consists of three teams from high-major leagues and I like all of the matchups. Iowa is a consensus last place Big Ten team. Virginia (Thursday, Dec. 30) is being picked by most to finish last in the ACC. California will come to Ames on Saturday, Dec. 4 for the Big 12/Pac 10 Hardwood Series. The Bears are being picked by most to finish towards the end of the Pac 10, a conference that was beyond brutal a season ago. Will Iowa State win these games? Who knows? Two of the three are on the road. But still, these are winnable contests for Iowa State. 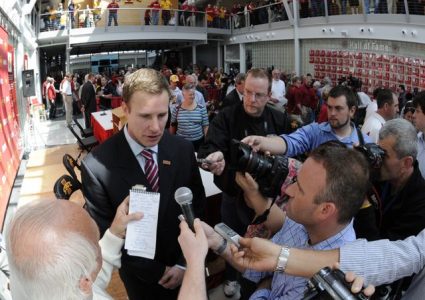 SI chimes in on ISU hoops 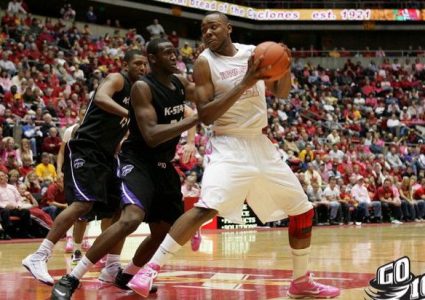