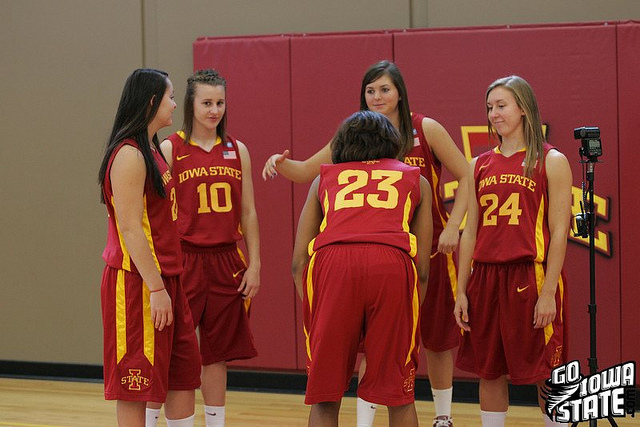 Five players are vying to become the starting point guard for the Iowa State women’s basketball team this season.

All they need to replace is 1,620 points, 528 assists, 578 rebounds and way more leadership than you can possibly count. Alison Lacey is gone and the candidates trying to take her place are low on experience but high on optimism.

The Cyclones held their 16th media day under head coach Bill Fennelly on Monday and for the first time, it came without a definitive starter at point guard.

“I’ve told all of our point guard candidates, everyone in life wants an opportunity in whatever we do,” Fennelly said. “There aren’t five people with a better opportunity than the five trying to play point guard at Iowa State.”

That’s because the winner of the competition will inherit a team that’s won 52 games the past two years with trips to the Elite Eight and Sweet 16. Of course, that was with Lacey. The former Cyclone finished her career sixth all-time in points at Iowa State.

“They are all good enough,” Fennelly said. “They are all on scholarship. They just need to go out and play. If we can find one to do it, I think we’ll be a pretty good team.”

Luckily, the new point guard will be surrounded by plenty of talent. Starters Kelsey Bolte, Chelsea Poppins and Anna Prins return for Iowa State, who is ranked No. 17 by The Sporting News and No. 18 by Athlon Magazine. Also back is Jessica Schroll and Amanda Zimmerman, providing Fennelly with a strong nucleus to work with.

The sharp-shooting Bolte will be counted on heavily to score. Last season, the senior hit 41 percent of her shots from 3-point range and averaged 12.3 points per game. She drained a career-high eight 3-pointers against Iowa.

That’s all great, but Fennelly is looking for Bolte to take the next step. Instead of differing to her teammates, she needs to take the tough shot.

To help prepare for this season, Bolte said she paid specific attention to her dribbling. Without Lacey around, Bolte will need to create her own shot more often and take some of the ball-handling burden off a new point guard.

No one is sure who that will be yet, but Bolte is excited to start practice on Tuesday and see who steps up.

“This next month is very important. We need to get everything down and learn the ‘Cyclone Way’ of doing things.”

One of the point guards looking to step in is Lauren Mansfield. She and Lacey are both from Australia, but that’s about the extent of what they have in common – at least so far.

“Lauren is more of your prototypical point guard – distribute the ball, get you in the offense, not hunt your shot,” Fennelly said. “We wanted Aus to shoot more. I don’t know that’s Lauren’s game.”

The 5-foot-7 Mansfield spent the past two seasons at Midland College in Texas where she averaged 11.6 points, 4.6 rebounds and 3.4 assists last year.

“I think I’m a creative point guard,” Mansfield said. “I like to go off the dribble and create for my teammates, and take the set shots when it’s open.”

Chassidy Cole is another name to keep an eye on. The junior started three games last season and scored eight points against Iowa.

Newcomers Darcie Dick, Kelsey Harris and Elly Arganbright should also be in the mix.

“The pressure is one of (the five) to come through and play point guard,” Fennelly said.

The Cyclones will find a lot out in the next few weeks. With practice now underway, it’s time for someone to take charge.

“We have plenty of guards and I’m sure they are all going to do great,” forward Amanda Zimmerman said. “You can’t really tell yet until our first game. We have to play with what we’ve got and everyday at practice give 100 percent.”

The clock is ticking toward Nov. 4 when Iowa State tips off against Minnesota-State Mankato. In the meantime, the five potential point guards will be battling for one of the most coveted jobs in women’s college basketball. Who wins is anyone’s guess.