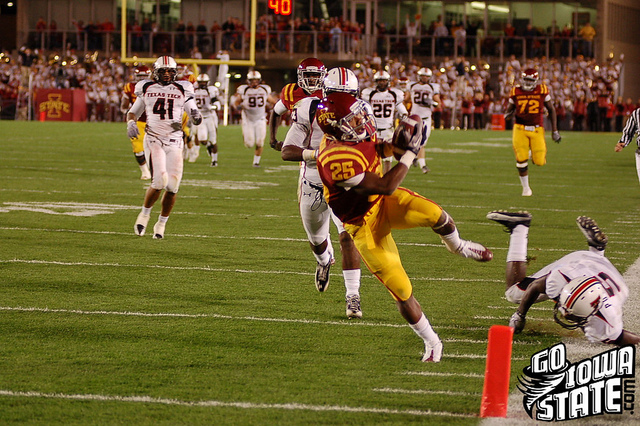 I doubt I was the only one inside Jack Trice Stadium on Saturday night who had this thought run through their mind when the score was 24-0:  Kansas 2008.  One for the trash heap that can’t seem to find its way out of the memory bank, Iowa State led that game 20-0 at the half before crashing, burning and losing 35-33.

My suspicions were further confirmed with the shaky ending to the second quarter, now all I could think of was:  Kansas State 1999.  ISU surprisingly led 28-7 at halftime only to lose 35-28 in what would have been a landmark victory over a ranked team for the Cyclone football program.

And finally, given the manner in which those 14 points were given up late in the second quarter from Saturday, horrific nightmares flashed before me of:  Toledo 2007.  That game, of course featured Iowa State blowing a 35-24 lead late in the fourth quarterwithout the Toledo offense ever taking the field.

But not on this night, not to this coaching staff, not to this team.  Things got even more white-knuckled in the third quarter when Tech was able to tie the score up at 24.  The Red Raiders even got the ball back with a chance to take the lead before a crucial gift of a fumble gave the ball back to the Cyclones leading to the most important offensive series of the night—and quite possibly season.

Starting on the Tech 39-yard line, it took just six plays before Austen Arnuad found Collin Franklin on a beauty of a 27-yard throw and catch in the back corner of the end zone.  That put the Cyclones up for good with a 31-24 lead.  The second most important drive of the game?  The possession immediately following the lead being reduced back to a touchdown by Texas Tech.

With the score 38-31 and a few ticks shy of 10 minutes remaining in the game, Iowa State went on a 13 play, 53-yard drive elapsing nearly six and a half minutes.  On that drive was a steady dosage of Jeff Woody.  Six of the final eight calls were Woody “pinballing” through the line for gains.  Then of course on the touchdown pass, I and everyone wearing a white helmet thought it would be one more dose of Woody toting the rock to keep the clock running.  This was the pure beauty in the play that was actually called…play action pass to a wide open Hammerschmidt in the flat.

Wrapping up some of the craziness that happened on Saturday night:

To conclude my Texas Tech wrap up, I give you my five games where I had the most fun—not best win—experiences ever at Jack Trice (every home game from 2002 to present and a smattering of games before then):

And just how crazy was this game?  I haven’t even mentioned the fake punt that had Vanderkamp scampering for 17 yards on 4th and 9 from the Iowa State 32 yard line.

Revenge on the Utes

It’s been mentioned here and there that ISU is 4-0 all-time against Utah.  All of those wins coming before Iowa State fans knew who Jim Walden was.  My two biggest reasons for wanting to beat Utah outside of the normal “beat a top ten team” jargon?  The NCAA Tournament in 1944 and the NCAA Tournament in 1996.  You probably don’t remember that great tournament in 1944 but Utah beat Iowa State in the only trip the Cyclones have ever made to the Final 4 en route to the Utes winning the national title.  More fresh in our memory is the 1996 loss to the Keith Van Horn led squad that denied ISU a trip to the Sweet 16.  Of course, maybe that was for the best since Utah was throttled by 30 in the following round against eventual national champ, Kentucky.

The game with Utah this year is as big as they come for a non-conference game in the second week of October.  The attendance was sparse last week but with the big win, inspired confidence, and the outlook of phenomenal weather maybe that can change this week—it certainly should.  We were all terrified throughout April, May, and June with what conference we would land in, now is the time to ante up to make sure we aren’t in that same position in 2, 5, 8, or 15 years.  You can take it to the bank that it will be an issue again in the reasonably near future.

The Utes are the 10th ranked team in the nation and over the past five years they have had a program that supports that ranking.  However, they are still largely untested this season other than a home dog fight of a win over Pitt.  A Pitt team that is lead by Dave Wannstedt, Paul Rhoads’ former boss, perhaps some insights will be shared?

Utah will provide a formidable task for the Iowa State defense while they are similar to what Texas Tech does on offense they are also far more established offense due to coaching continuity with a bevy of talent to utilize.  The defense will have to perform like last week in getting crucial stops, a few turnovers, and limiting the big plays.

If the Cyclone offense plays like it did last week they will hang around in every game left on the schedule and they will have an excellent shot at pulling out the upset on Saturday.  Will we see the same offense, with the same execution, decision making from Austen Arnaud, blocking from the line, and great grabs by the receivers?  If we do, I think Iowa State brings home its third straight win.

Beings I picked against the good guys last week I just can’t do that again.  I’m going to assume that the offense has turned the corner and the light bulb has come on.  That is far more fun for me than expecting regression at this point.  It’s a Cyclone shocker for the second week in a row!  (A special reminder to students and other attendee’s:  If the upset does happen, please, please, PLEASE don’t chant “overrated”.  That is contradictory and dumb, please and thanks.)