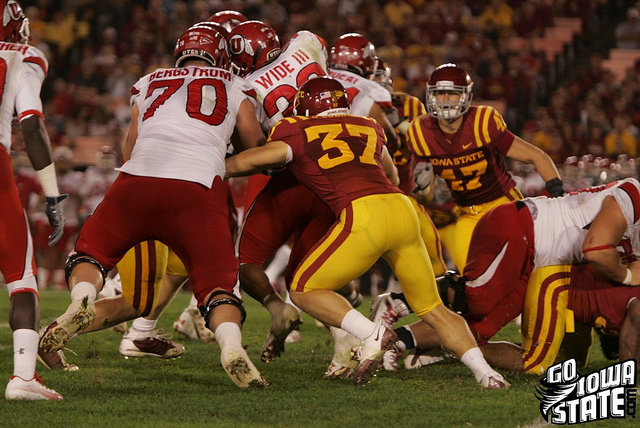 Is it time for a nickname?

Probably not, but if the Iowa State defense keeps playing this way next week against Nebraska, then fans should certainly start looking for one.

“They have a nice confidence level in getting the job done,” Iowa State head coach Paul Rhoads said.

Give credit to the defensive line. The Cyclones are getting used to harassing an opposing quarterback. On Saturday, Iowa State sacked Kansas’ Quinn Mecham twice and recorded six tackles for a loss.

“It makes a huge difference,” linebacker Jake Knott said. “The last couple of weeks our defensive line’s done a tremendous job. We are getting a lot more pressure. When that happens, so do turnovers and sacks.”

Knott should know. When the line wasn’t making plays, the linebackers did. In the third quarter, Knott – who notched 13 tackles – dropped into coverage and intercepted his team-high fourth pass of the season.

“I saw the tight end start to come up field,” Knott said. “Coach (Wally) Burnham has been preaching all week about that kind of play. You have to stay in that zone. I saw him out of the corner of my eye and I saw him go by me. I got ready to jump and that’s what happened.”

The Jayhawks added a garbage time touchdown to account for the final margin, but the game was long over. Mecham completed 22-of-33 of his passes, but those completions went for only 149 yards.

Maybe most impressively, the Cyclones’ defense weathered an early charge from Kansas. With the offense sputtering, the defense managed to hold the Jayhawks to nine first half points despite the fact that Kansas held the ball for 21 minutes, and 17 seconds.

A bigger challenge looms – Nebraska brings its potent attack to Jack Trice Stadium next week. Last year, the Cyclones forced eight turnovers in a 9-7 win. Is another herculean effort in Iowa State?

The Cyclones can’t wait to find out.

A sleepy afternoon at Jack Trice Stadium turned into a rout thanks in part to Josh Lenz. The sophomore’s sensational punt return sparked Iowa State and helped turn a lethargic first half into a Cyclones victory.

Trailing 6-0, Lenz caught a deep punt and immediately went to his right. He shook a tackle on the sideline and cut back to the left. Lenz slipped another Jayhawk at midfield and sprinted down the left sideline for the 62-yard touchdown.

“I know my guys are going to set up a couple of blocks for me if I get to it,” Lenz said. “I made the first guy miss and then I had some guys set me up for some blocks. When I got to the sideline, I was hoping I had enough gas left to get to the end zone.”

The punt return for a touchdown was the first for Iowa State since 2006 when Ryan Baum pulled off the feat.

Iowa State blocked a Kansas field goal, and Kirby Van Der Kamp had a 46-yard punting average on his four attempts to help the Cyclones win the special teams battle.

Saturday’s final score is a bit misleading. The Cyclones absolutely dominated the second half. The first half? Not so much.

Kansas controlled the ball and the scoreboard for much of the first 30 minutes. The Jayhawks held the ball for 21:17 thanks to 30 rushes for 92 yards.

“It was a very good Kansas effort,” Rhoads said. “They played better (in the first half) than they did in the past.”

A fumble on the Cyclones’ first play of the game resulted in a field goal and 3-0 lead for Kansas. Iowa State went 3-and-out on its next two possessions, giving the Jayhawks much needed life.

Fortunately for the Cyclones, all of Kansas’ early momentum only resulted in a 6-0 advantage. A deadly blow to any chance of an upset on Saturday.

Center Ben Lamaak didn’t play on Saturday because of an MCL sprain. The Cyclones survived without their senior stalwart, but they desperately need him back before next Saturday’s game against Nebraska.

Rhoads is hopeful Lamaak will be able to play, but he will need to make a lot of progress between now and next Saturday. 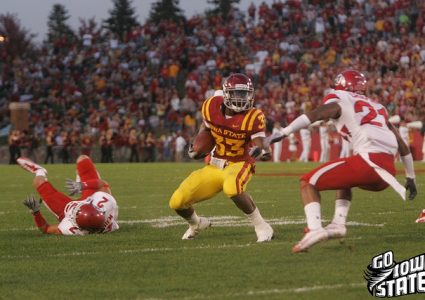 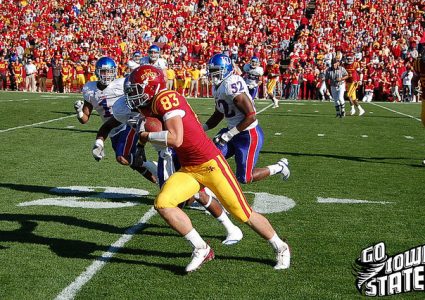