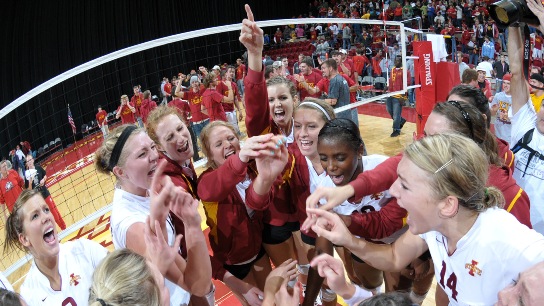 No, not the football team—the volleyball team.  It’s far from the most prominent sport that gets played at the college level, but it was by far the best thing that happened for Iowa State this past weekend.  A road trip domination and 3-0 sweep of the in-state rival is never a bad thing.

Don’t worry, I’ll get to the football game in a moment.  But one of the more over shadowed events this week has been the upcoming volleyball match that will be on national TV on ESPNU against one of the nation’s elite programs—the Nebraska Cornhuskers.  It should be an interesting environment and a raucous one from the Ames High School gym as the #11 Cyclones look to take down the #4 Huskers.  The same Huskers team that the Cyclones were able to beat on the road for the first time in ages last year, as well as the same Huskers team that swept the Cyclones out of the NCAA tournament in Omaha later on.

With Christy Johnson-Lynch’s past involvement with the Husker program in her playing days and the number of players she has been able to woo to Ames from our neighbor’s to the west, this series can only get more intriguing and more competitive.

There really isn’t much left to breakdown about this game now that it’s Wednesday (thank you Ben Bruns for pointing out to everyone that it’s time to move on yesterday).   I, like most everyone else, was surprised at how the game transpired on Saturday.  Had Hayden Fry been coaching, it would’ve been closer to 56-0.  The two biggest negative surprises for me from an ISU perspective were the defensive line getting handled and the ineptness of the offense to even move the ball.  I don’t want to spend much time on this but here are the main things I think can be taken away from this “flush” game:

The fact of the matter is that making a bowl game is still very much a possibility, albeit a difficult road.  There are still winnable games on the schedule with Kansas, @Colorado, Missouri, Texas Tech, Utah, UNI, and…Kansas State.  Even Nebraska isn’t unwinnable at this point.  Throw that into the mix and the Cyclones need to come up with wins in five of those eight games.  Anything beyond that is gravy.

Just like last year it has all of the makings of a pivotal game, one that has serious ramifications on Iowa State’s hopes for bowl eligibility.  Of course, we said that last year and the Cyclones lost.  However, they were still able to find their way to six wins thanks in large part (or only part, really) to the win in Lincoln.  With road games looming in Norman and Austin it would be best for all involved to get back to the winner circle this Saturday.  Not to mention the difference in mental stability for a team that would likely be leaving the UNI game at 3-1 as opposed to entering it 1-2 and who knows what could happen.

Daniel Thomas is a legit runner and the key component to the Wildcat running game.  Their rushing attack has been dominant thus far against a poor UCLA team at home and Missouri State.  I don’t know anything about Missouri State but I bet they don’t have a roster full of world beaters.  Just a hunch.

While one could argue that Kansas State will have a ground game nearly as strong as Iowa, their aerial attack is not as competent and their defense not nearly as stifling.  The key there is for the ISU offense to find a rhythm early and move the ball well.  Give the defense a break every once in a while.  Basically the exact opposite of this past Saturday.

Stop the run and force Carson Coffman to beat you with his arm.  Not once, or twice, but probably three times before adjusting.  Coffman only threw 16 times against UCLA, completing 11 passes for 66 yards and a touchdown.  The longest pass play of the day was 21 yards.  Speaking of which, thank heavens that Brandon Banks is gone.

Linebacker is certainly a concern for ISU with a few misreads on gaps last week and the loss of Matt Tau’fo’ou—the run stopper—with a broken leg.  Wally Burnham and Paul Rhoads may have to get creative on schemes.  I don’t care how they do it, just make Coffman and the wide receivers make plays and don’t allow Thomas to run free throughout the day.