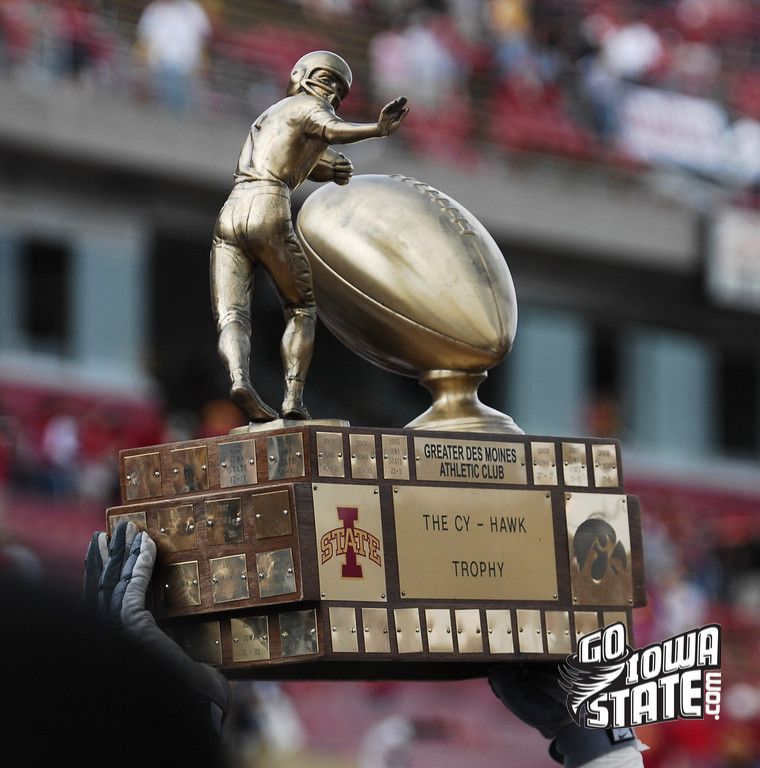 I’m going to play right into the hands of Hawkeye fans…sort of.  This year’s edition of the Cy-Hawk rivalry has huge ramifications for the Cyclones.  It isn’t about beating your in-state rival just so you have “scoreboard” on the Iowa fans in your office (although that is an added benefit).  Winning this game won’t shut up the annoying Iowa fans—that is a metaphysical impossibility, as is the case with all annoying fans.  This game has “program changer” written all over it.  Winning on the road, at the venue of a top 10 team with legitimate dark horse national title hopes would validate last season and should propel the Cyclones this season.

The spring board effect that this game could have on the Cyclones’ season has nothing to do with them being the in-state rival and everything to do with them being in the top 10.  If the Oklahoma or Texas game was this week and as winnable as this game, I would be saying the exact same thing about the “oomph” it could provide the Cyclones.  It won’t cost Iowa State the season if they lose, but it could offer great rewards if they win.  In the same respect it won’t make the season with a win, but it could propel this team beyond current expectations.  Not because Iowa is the rival, but because of the status of that rival on the national level.

Every year, Cyclone fans hear the same thing about the sliding scale of rewards for this game and the differing benefits for both football programs; everything to gain for Iowa State, everything to lose for Iowa.  I’m just going to say it, that line of thinking makes zero sense and is only created by ill-conceived perceptions.  It is in fact true in many ways, but the same could’ve been said when Eastern Illinois rolled into Iowa City last week, or when Iowa hosted Western Michigan in 2007, or when Iowa plays any Big Ten team not named Ohio State.  Point being is that line of thinking is prevalent in 90 percent of college football games and it reeks of a lame excuse.

“Yeah, they came in and tried harder than us, it just wasn’t fair.  We didn’t know that the game was going to require that amount of effort to win, it just isn’t right that the other team put in that effort and won.  The game just means more to them, they basically cheated by trying harder and caring more.”

The winds are nowhere near the same as they were in 1998.  That was a 15-game win streak that was snapped as opposed to the two year run at the moment.  Things are a little bit different now.  That game was a program changer and a job saver for Dan McCarney even though both teams were pretty poor in hindsight.  Kirk Ferentz now has things humming and Iowa State is no longer the pushover that Jim Walden morphed the Cyclones into.  This is a winnable game that is not outside the mental capacity of the ISU players.  Winning in Iowa City is nowhere near the mental hurdle as winning in Austin, Norman, or Lincoln.

Oh yes, that win in Lincoln.  What of it?  It was a fluke, a gift, an act of charity.  Right?  You see that mentioned all of the time.

“Eight turnovers and only nine points?” the national media—and some local—will say.

Forgetting entirely what the backfield situation on the Iowa State offense was.  But as we learned in the second paragraph, perception is the reality we are forced to live with no matter how untrue it is.  Even so, after that win in Lincoln is there any reason this team should believe it can’t win in Iowa City?  I wouldn’t imagine the expectation would ever be to win in the same manner, but winning is not off the table.

Now let’s throw in what everyone is saying about this game, this year.  Iowa is a 14.5 point favorite, but that isn’t what I’m referring to.  I’m talking about the people that think “how dare Iowa State even have a football program that takes away from the GREAT University of Iowa Hawke-EYES!”

Typically I would ignore these under-educated fellows and just call it good but there is only so much ill-informed clamoring that one can take.  I’ll save the character space you know what I’m talking about.  I am NOT whining about a lack of respect for Iowa State.  Respect is earned over time with performances on the field, I’m simply pointing out the ignorance I have to do battle with every year in the week leading up to this game.

In all honesty, I haven’t seen as much of the Iowa game as I would have liked to but how much is there to really learn from a 37-7 romp over Eastern Illinois?  I’m not sure how much I really need to see, though.  With Iowa and Ferentz at the helm, you pretty well know what you’re going to get.  For Iowa State, moving the ball on offense will be difficult, scoring in the red zone will be nearly impossible, stopping the run will prove key and containing the slants/waggles/bubble screens will be imperative.  Forcing Stanzi into errors is certainly possible but so far, they have not been costly in the win column for Iowa.  Not to mention, we all know that the Iowa defensive line will just manhandle the Iowa State offensive line as they are supposed to every year, yet rarely do.  Even last year’s mistake laden game for Arnaud was filled with exactly zero sacks by the Iowa defense, one tackle for loss by the defensive line and one quarterback hurry.  Their defense and defensive line is plenty good but it isn’t the mismatch that is perpetrated every year, not even close.

Can Arnaud control his adrenaline?  Can the Cyclones run the ball?  Can the ISU offense move the ball in the red zone just as well as out of it?  Can the Iowa State special teams shape up?  Can the Iowa offensive line provide running room for their A-Rob?  Can Kelechi Osemele again stand toe-to-toe with Adrian Clayborn?  Can the young Cyclone linebackers step up their game another notch?  Can the Iowa secondary again confuse and force turnovers out of the ISU offense?  Can the ISU defense mirror the strength of the Iowa defense and “bend, but not break”?

Those will largely be the questions that decide the game.  Predicting a game like this is always a challenge for the optimistic fan (me).  I obviously want Iowa State to win and find ways to validate that position logically.  On the other hand, this is a game that the Cyclones are clearly not expected to win and picking in favor of the one-out-of-ten scenario just wouldn’t be rewarding.

In this case, I have to side with my head and hope with my heart (corny and cliché, I know).  I think it will be a 10ish point lead for Iowa for most of the game and will be back and forth with that difference.  As opposed to late scoring that makes it look closer than it really was or a late score by Iowa to make it look more lopsided than it really was.  As much as I enjoy this game for the build up and the drama amongst friends, family, and co-workers I will be relieved when it is over, no matter the outcome. 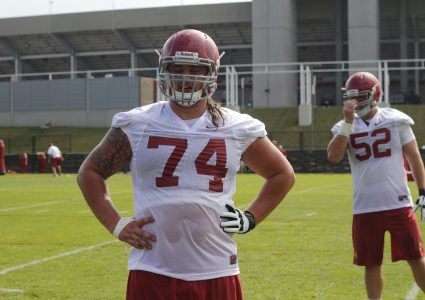