The players aren’t the only ones ready for the season opener.  Scrimmaging and hitting the same guys every day—sometimes for two practices a day—grows old.  Sooner or later it’s time to put on the game uniform and perform in front of the fans.

Similarly, there aren’t many more angles to take, or aspects to breakdown for folks like me. Actually, there probably is for the other guys that do these things because they are good enough at what they do, they command a salary.  We’ve spoken ad nauseum about the need for Austen Arnaud to make the offense go.  We’ve delved deeply into the hot contest for playing time at running back behind Alexander Robinson.  We’ve pondered the big play ability of the wide receivers, both returning and new.  We’ve even broken down the offensive line comers and goers with new positions for a couple of starters.

The new faces and experienced bodies on the defensive line (“Dutch”, Parker, and McDonough).  We’ve hemmed and hawed over the three new linebackers who will open as starters and the potential of Knott and Klein.  There are familiar names in the secondary with the new attitude of Leonard Johnson.  Even the race for punting duties has been discussed.  Really, the only position that hasn’t been considered heavily is kicker, where Grant Mahoney has apparently had that gig locked up all along.  We’ve been ramping up for this week since the wee hours of the morning on January 1st at the New Year’s Eve block party in Tempe.

Thankfully, the wait is nearly over.  It’s time to head to the lots and be inundated with grill smoke and generator noise.  It is too bad that I will be missing out on that part of the party on Thursday but I’ll be ready for game time.

The Northern Illinois Huskies will bring a tough rushing attack to town and little fear of a BCS opponent after beating Purdue last season and narrowly falling to Wisconsin.  They have a solid defense to accompany their ground game—that if it gets going can be a formidable task to stop.  Last year running backs Chad Spann and Me’co Brown rushed for 1,038 yards and 19 touchdowns and 645 yards and four touchdowns respectively.  That is some pretty salty production.

Last year NIU struggled with the passing attack and seemed hesitant to open up the playbook and chuck the ball all over the field—Dan McCarney anyone?  Conventional wisdom would say that NIU will come in and try to run the ball against the susceptible front seven of the ISU defense to play ball control offense, while hanging tough on defense and limiting the big play.

But my “spidey” sense tells me they might be up to something different.  Surely they have been prepping for this game for a long time, despite having two other BCS opponents on the schedule in Illinois and Minnesota.  I think that NIU is going to come out and try to establish the play-action pass and soften up the ISU defense.  The young linebackers will be very concerned with stopping or at least containing the run.  That may lead to a step or two toward the line of scrimmage at an ill-fated moment leaving openings for the receivers and tight ends in the middle of the field.  Will they do that and will it actually work?  I don’t know, but I’m expecting the curve ball out of the chute.

The Huskies, however, are still not completely settled at quarterback as the question of who would start lingered through two-a-days.  They also have woes in the kicking game that could make Dan McCarney blush (I really wasn’t planning on two Dan McCarney references in one article).  Now is a good time to note that last year’s 7-6 record for the Huskies that included the aforementioned win over Purdue, does have something peculiar about it.  In those seven wins, the opponents averaged only 3.4 wins on the season (five of those teams won zero, one, two, or three games).  So while they accomplished a fair amount last season, they still have a lot to prove.

I think if both teams play average or above that ISU will come out victorious.  NIU is the chic pick to win the weaker west division of the MAC, but I do not believe their defensive line can match up with the ISU offense and I don’t think that their offense will run the ball at will all night.  They will likely have some ground success, but I don’t see them gashing the defense for more than 20 points.

Leaning on the prevailing point of Brent Blum’s column from last week (“The ‘RDTF’ Factor”), the most likely way for ISU to lose this game is with untimely turnovers.  In the “upset” loss to Kent State in 2007 (14-23) ISU twice lost the ball at midfield and once lost the ball inside the ISU 20-yard line.  Including two Cyclone missed field goals, Kent State was able to score 14 of their points from those situations.  Iowa State did end up with three turnovers as well.  In the following week in the upset loss to UNI (13-24) it was a similar story that was the downfall of the Cyclones, only worse.  In that game ISU had four turnovers while being unable to garner any takeaways.  Including a missed field goal by ISU, UNI scored 17 of their points from Iowa State miscues.  Take care of the ball and take care of business and everything else will fall into place.

Smart money will guarantee that Austen Arnaud and company come out hyped up beyond belief, let’s just hope that Arnaud is not too hyped and he controls his passing accuracy.  That said, his hyped nature also fuels his Mike Alstott impersonations when he is carrying the ball.

It won’t be the run-away blowout that the casual fan may expect but I also don’t believe it will be the nail-biter that others have expressed.  There will be some tense moments in the fourth quarter, perhaps with just a one possession lead for ISU.  But I think ISU will run the ball effectively and get enough out of the short passing game along with the wide receiver screens to move the ball more often than not.  Can they avoid the mistakes and capitalize on their scoring opportunities?  That is yet to be seen but I have faith in #4 running the ball for the tough yards in the red zone.

I think the defense will stop the run reasonably well and the Huskies will struggle through the air just enough to have difficulties with moving the ball.  They will likely have some success on the ground but I also believe the ISU defensive line is capable of maintaining their gaps in run support even if they struggle to get a pass rush.  The home team should also have the more stable of the kicking games. 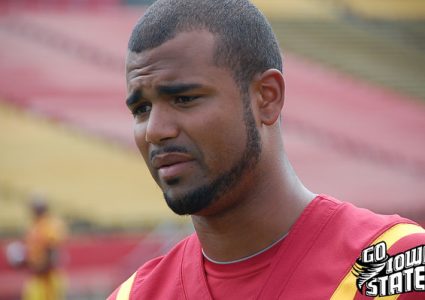