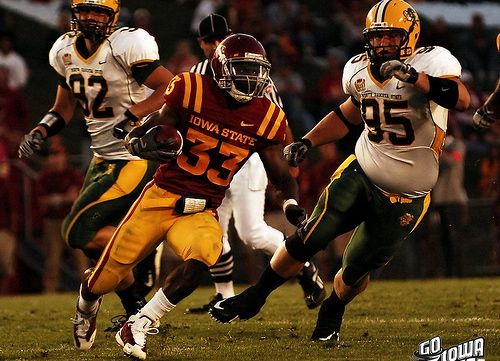 If this article sucks don’t blame me. Blame Ken Miller.  As the best bookie in Iowa (as proclaimed by this blog) and sports talk show host for 1460 KXnO, he has spoken.  I have provided him with a list of prop bets pertaining to the upcoming Iowa State football season.  He has made the odds and I will provide the subpar discussion.  (For the record, Ken is not accepting bets on these numbers.  If you send him money he will pocket it.)

Let’s start off with on a bit of a painful note that could possibly be turned in to some glee.  It’s sad how long it’s been since Iowa State last scored a touchdown against Iowa (second quarter of the 2006 game), 14 quarters to be exact.  That was a long time ago…I was a newlywed in an apartment with no kids, or dog and Cyclone Fanatic was in its infant stages.  I’m now saddled with a mortgage; surrounded by two more girls (daughters), have a 120-pound golden retriever (Clyde) to deal with. Oh yeah…Cyclone Fanatic sure has grown up.  Enough babbling, here they are:

The “it could happens”

Here are the borderline bets, the in-between bets that will be the best indicator on how successful the 2010 Cyclones really were.  Headlined by arguably the biggest regular season game in Iowa State history when our long-time, dominant neighbors to the west make what will likely be their last trip ever to Jack Trice Stadium.  (I actually just thought of that…perhaps that is only true outside of the Missouri game in 2004 and the Kansas game in 2005 that would’ve won the division for ISU had they been able to win.)

For a frame of reference check with how difficult it is to beat these odds; Iowa State’s odds to win at Nebraska last year was 7.5-1.

Iowa State will beat Nebraska…20-1. Iowa state has taken more Mike Tyson upper cuts to the chin from Nebraska than anybody but thanks to last year’s remarkable upset in Lincoln, the Cyclones can accomplish something that has not happened in more than 30 years…win two straight over the Huskers.  That’d be a nice way to send them to the Big Ten.

For a frame of reference check with how difficult it is to beat these odds; Iowa State’s odds to win at Nebraska last year was 7.5-1.

Mine That Bird takes notice

The 2009 Kentucky Derby winner did so at the odds of 50.6-1.  In the long and storied history of the Kentucky Derby only two other winners have won against similar or worse odds, Giacomo in 2005 and Donerail in 1913—less than two years after the sinking of the Titanic.  What bets fall into this realm?

Lloyd: What do you think the chances are of a guy like you and a girl like me… ending up together?

Lloyd: Hit me with it! Just give it to me straight! I came a long way just to see you, Mary. The least you can do is level with me. What are my chances?

Lloyd: You mean, not good like one out of a hundred?

Mary: I’d say more like one out of a million.

Lloyd: So you’re telling me there’s a chance… *YEAH!*

The Longest of the long shots can be found here. 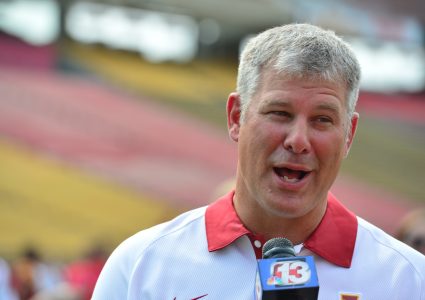