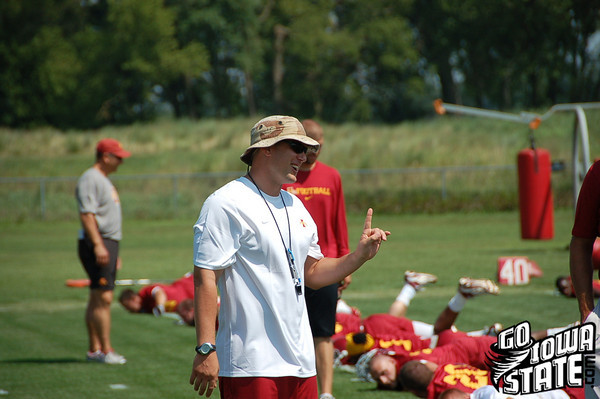 “They played a lot better,” Iowa State offensive coordinator Tom Herman told CycloneFanatic.com after practice. “I think after we went and looked at the video of practice one, it certainly wasn’t anything that we would be proud of but I don’t think that it was as bad as what we thought it was leaving the field as far as quarterback play goes. I think it was a combination of some things in practice one including some rust. They wanted to go out there and win the Super Bowl in practice one. Obviously, we can’t go do that. Today was a lot more reminiscent of spring practice and that was encouraging.”

Friday was Iowa State’s second and final practice without pads in the 2010 camp. Saturday, the team will go at it in helmets, shoulder pads and shorts, before the real hitting begins next week.

Thursday’s sloppiness wasn’t only due to the quarterback position. Dropped passes hindered a deep group of Iowa State wide receivers, which tends to be the norm during this time of year.

As far as that positional group goes, numbers will not be a problem for Herman’s offense. In fact, receiver might be Iowa State’s deepest position on the roster. What a difference a year makes, after Darius Darks, Darius Reynolds and Sedrick Johnson all suffered injuries in the 2009 campaign.

Even with all of those able bodies suiting up for Iowa State, Herman is still looking for that elusive playmaker.

“The percentages would say that out of that group of guys, as deep and as many numbers as we have, we would be able to find one or two who can be a playmaker for us. That is the nice thing about this year compared to last,” Herman said.

What about the play of freshmen Albert Gary, Chris Young and Jarvis West early on in camp? As expected, they three young guns have some work to do.

“They are out of shape,” Herman said. “I don’t think that they understand the tempo of our practices yet. They don’t understand the culture of Coach Rhoads’ program here at Iowa State. But they are learning it and they are fighting through it. The older guys are teaching them that. But physically, when they are fresh, they certainly have some ability. Their heads are swimming a little bit right now because of all of the offense we’ve thrown at them. When they go out there and know what they are doing, they certainly are impressive to watch.”

Freshmen running backs Shontrelle Johnson and Duran Hollis will likely draw a lot of attention to themselves over the next few weeks. Herman commented on their first two days of camp.

“They are raw, although they have come from very good high school programs,” Herman said. “Still, they are feeling their way around the offense so to speak. When they are allowed to be free and open, they have a lot of talent.” 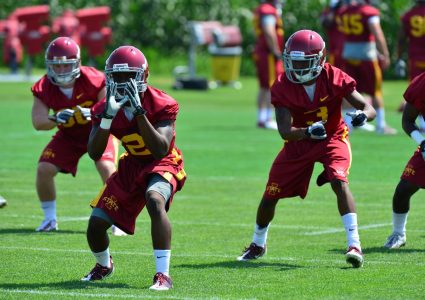