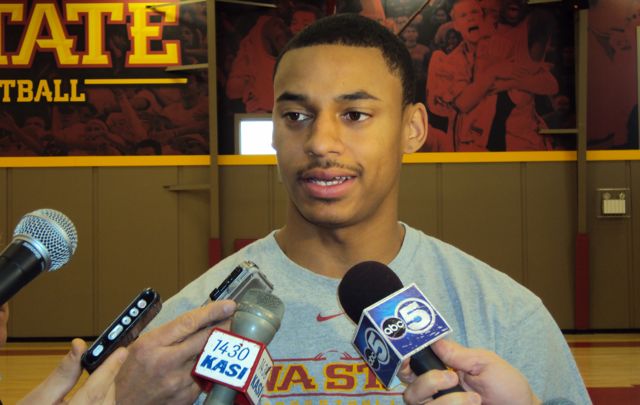 Two Cyclones were honored for their summer performances after last night’s competition.

Iowa State freshman Melvin Ejim was named the league’s MVP for the regular season. Ejim lead the league in points, rebounds and steals throughout the summer. Ejim went 8-for-16 from the field to score 28 points and rip down 14 rebounds in his team’s championship game loss last night.

In addition to Ejim’s award, Palo was named the Capital City League Tournament MVP. Palo had eight rebounds and seven assists on top his 21 points in the title game.

“We keep getting his confidence up and making sure that he is in the gym all of the time,” Garrett said about Palo. “We always work on stuff. We do it together. In the Capital City League, we’ve been able to build more chemistry together.”

–       Read more of my notes from last night by CLICKING HERE. You’ll learn that one guy who impressed me a ton was Southern Illinois transfer Anthony Booker. The big man scored 20 points with 11 rebounds in the championship game for Tim Vorland photography.

–       Jake Anderson and Chris Babb both struggled in semi-final losses last night. Babb went 2-of-12 from the field but managed to dish out six assists in the game. Anderson scored nine points, while going 3-of-9 from the field for Granite Transformations.

–       Scott Christopherson and Jamie Vanderkben’s Peak Performance team was eliminated in the semi’s by Garrett and Palo’s squad. In the loss, Christopherson led the way with 30 points, while going 12-of-20 from the field. He dished out five assists and went 4-of-7 from 3-point range. Vanderbeken scored 16 points and recorded eight rebounds in the game.