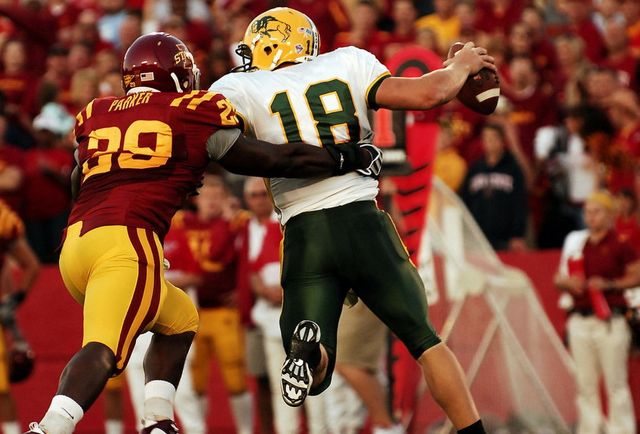 To my knowledge, Iowa State’s season opening football game against Northern Illinois on Thursday, Sept. 2 has not been picked up for television yet.

We do know that the game will kickoff at 7 p.m.

This morning, I researched all of the different games taking place around America that night.

USC will travel to Hawaii in ESPN’s late game.

Versus will broadcast Pitt @ Utah. That should be a good one that Iowa State fans will keep a close eye on, as Utah will roll into Ames later on in the year.

If any other networks out there want/need a game, Northern Illinois @ Iowa State should be the one.

Northern Illinois is pretty much the unanimous pick to win the MAC’s Western division. Iowa State is coming off a seven win season and an Insight Bowl victory.

Will all of America be amped up about this epic meeting between the Big 12 and the MAC?

No. But it is a heck of a lot better than watching Minnesota and Middle Tennessee State. Am I wrong? For one, it is Minnesota, who is quite possibly the most boring team in all of division one football. And let’s be honest. Any school with both words “middle” and “state” in it’s name should not be on national television on opening night. Yes, they were both bowl teams a year ago. But the problem is, nobody cares about either of them. Minnesota is a pro sports state. I don’t know this for a fact but I can only assume that Middle Tennessee State fans are Vols fans first. Kind of like Creighton and Nebraska you know? Again, that is only an assumption.

Now I realize that this entire conversation has TV contracts and politics written all over it. That’s why all of those important people are in Kansas City this week.

But still, this game needs to be on television simply because it is going to be awfully competitive. In a night where blowouts are going to be the norm, this one has a chance to go down to the wire.

I write this fully admitting that I am biased on this topic.

Thursday night games in Ames are an awesome thing. The atmosphere surrounding Jake Trice Stadium is electric and just the thought of what Sept. 2 will bring makes me proud to be a Cyclone.

Somebody, anybody, needs to pick this thing up. Even if it is FOX College Sports or something like that. This game belongs on television.

CLICK HERE to see the rest of the games scheduled for that night.