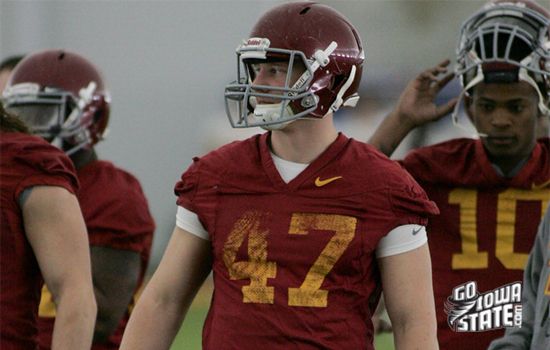 The signs are all around us…Sports Center is mostly showing baseball highlights. The NBA marathon is in mile 24 and pre-season college football prognostications are hitting newsstands across the country.  I can’t help but indulge myself—like many of you, I presume—but it’s curious how my level of engagement and interest in these magazines hinges on how optimistic they are toward the Cyclones.

With the “Murderer’s Row” schedule this year, a great overstatement when you consider how much more difficult the 2011 schedule will be but I digress, you can about guess how kind Athlon, Sporting News, and the one-and-only Phil Steele will be to ISU.  So, in lieu of a more expert analysis while the season is still eons away, let’s have some fun.  I will present some scenarios and ask which outcome is most likely—of course, my hard hitting analysis and personal opinion will be included, but I will ask for the sake of the discussion that you Fanatics run with it as well.

This is a toughie.  If for no reason other than both of these sophomores offered up a lot of optimism in their limited defensive but extensive special teams action last season.  Klein came in as more polished and laden with expectations, while Knott was a walk-on from Waukee.  I’ll take a wild stab and go with Knott, as he seems to my untrained eye to be a bit more of an “all over the field”.  There is no doubt this year’s LB corps is short on experience and will make their share of mistakes, but they are also heavy on raw talent and should make some plays as well.

Which Cyclone receiver will haul in more TD catches in 2010?  Sedrick Johnson or Jake Williams?

Sedrick Johnson spent much of last season hampered with a leg injury that slowed the progress of the sophomore on the field.  Reports from spring practice have been glowing, alluding to the thought he would be a larger contributor this upcoming season.  Jake Williams, a walk-on, was one of the surprises of the season that caught some memorable TD passes (the tipped pass in KC against Kansas State, the lone TD against Nebraska, and the bomb against Minnesota in the bowl game) and had a total of five TD catches.  My pick though, will be Sedrick Johnson.  I think his role will increase this season and his athletic 6-foot-3 frame will be utilized in jump ball situations in the red-zone.

Which Cyclone defensive back will grab more interceptions?  David Sims or Leonard Johnson?

David Sims led this category last season in his first year as a Cyclone, with five interceptions on his way to an all-conference selection and Defensive Newcomer of the year award in the Big 12.  Leonard Johnson only had two interceptions on the season but showed more flashes of the ability to make the big play, as well as the big mistake.  The smart money here is still on Sims, as he can roam from his safety position and that is my pick.

The main cog in the pass rushing game is gone to graduation. That’s Christopher Lyle. Rashawn Parker will look to fill that void.  Parker is essentially a four-year starter returning after receiving a hardship waiver due to only playing four games last year because of injury.  In those four games he had two sacks.  Ter’ran Benton elevated both his playing time and impact on the field last year with the near full-time implementation of the “nickel” package.  In that time, he came up with two sacks on the season.  I’m going to gamble here and go with Benton winning the sack race, assuming that he plays the nickel position this year as opposed to corner back, split wide from the defense.

Which back-up running back will run for more yards on the season?  James White or Shontrelle Johnson?

We’ve seen a little bit of what James White can do from the spring game this year.  He’s a smallish shifty back that can make defenders miss and he has a good burst.  Shontrelle Johnson is a 3-star running back that Iowa State was able to pry away from Northwestern, as the recruiting season dwindled that appears to have all sorts of promise.  I’m going to make the safe pick here and go with the experience and White.

Which Cyclone will score more rushing TD’s?  Austen Arnaud or all other running back’s combined?

Last season, Arnaud was Iowa State’s best goal line rusher and he ran for eight touchdowns on the season.  He’s built like a fullback and runs like one too and proves it when he gets near the goal line he is a load to bring down.  The only running back to score a rushing touchdown last season was Alexander Robinson, with six.  Obviously, the coaching staff would like to see more production from the running back position because that would likely indicate that they have found a viable back-up to A-Rob.  Even if they do, I’m still picking the “hometown kid” in Arnaud.

Which game is Iowa State most likely to score more points as a team, @ Iowa, Nebraska, or @ Oklahoma?

We’re entirely too aware of the situation with scoring touchdowns against Iowa, right?  If you’re not, let’s just say it’s been a while.  Bret Meyer was the culprit in Iowa City on September 16th, 2006, Dan McCarney was the coach, most of us were unaware of who Gene Chizik was (or Paul Rhoads for that matter), I had no kids (now have two plus a dog), and Cyclone Fanatic was in it’s infant stages.  Hopefully that ship will be righted this fall.

We all know about Nebraska’s defense as well.  Even though they lose a guy named Suh, they will still be very tough top to bottom but that contest is in Ames.  With Oklahoma, Iowa State has scored 9, 3, 14, 6, and 3 points in their last five trips to Norman, for a whopping average of…seven.

I do think the Cyclones will break through for a couple of TD’s against Iowa but that will probably be about it.  Oklahoma is just too stacked and athletic up and down the roster on the defense.  All three teams will have exceptional defenses but I’m going to roll with the Nebraska game because it’s at home.  I’m still clinging to the theory that the Husker’s defense was so great last season because of one of the best play-making defensive tackle’s college football has ever seen.

Which games are more likely to be placed in the win column?  @ Texas or @ Iowa?

This process is pretty much moot (or mute as some would say), but I have to go with Iowa.  Texas is retooling a bit this year after their trip to the national title in 2009, while Iowa is a legit top 10 team at the moment.  The greatest discrepancy being that Iowa State has achieved recent success against Iowa and even in Iowa City.  The same cannot be said about the Longhorns or Austin, Tex.  So while my pick is Iowa, I would much rather win at Texas, but I don’t see either happening.

Last season, the upset minded Cyclones nearly pulled off the win in Columbia.  Iowa State didn’t win the battle on the field for the Telephone Trophy, but it did win the battle off the field for the invite to the Insight Bowl weeks later.  Utah went 10-3 last season, including a bowl victory over California.  They have lost three of their top four receivers from last season and are breaking in a relatively new quarterback.  Couple that with their struggles with stopping the run—while running the ball was a Cyclone strength in ‘09—and I have to go with Utah.

The Nebraska game was already dissected a bit above, but aside from their strong defense, they have a very capable running back in Roy Helu.  They don’t have much to speak of for talent at the QB spot though.  Colorado is seemingly in year 37 of what will be their “breakout season” under Dan Hawkins.  Every year they are picked to be the surprise team of the North and every year, they flop.  At least now they don’t have to have Cody Hawkins as their starting quarterback to lead them to the aforementioned flop.  Iowa State has had tough luck winning in Boulder but they nearly pulled it off in 2008 with a 2-10 squad.  I think the Colorado game is the more likely victory.

There you have it, some football topics to chew on as replacement to the disappointing reading from the pre-season magazines.  Now, what say you?

Outside the men’s room: The winning way

Outside the men’s room: It’s about time