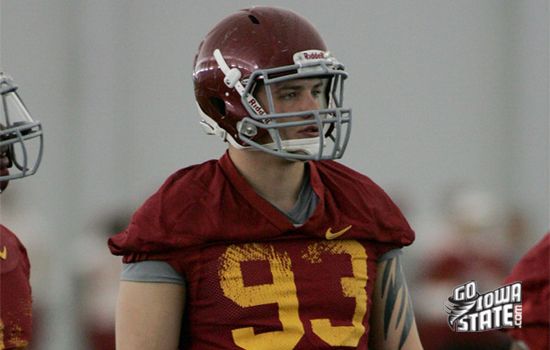 If you haven’t seen it by now, I recently updated our CycloneFanatic.com front page poll question.

Who will Iowa State’s second starting defensive end be next fall, opposite of Rashawn Parker?

As of 9:50 this morning, 36 percent of you Fanatics have voted for JUCO prospect Rony Nelson.

This, I do not get. The guy hasn’t taken a snap on Iowa State soil yet. Blind faith is the only reason that anybody could vote for Nelson at this point in time.

If he was competing in spring ball, I could go for it then. But again, Nelson won’t be around the football team until this summer. I assume that most of you have never seen him play. Can you really put him ahead of Roosevelt Maggitt or Patrick Neal, two players with Big 12 experience, who have all spring to get better?

Now having said all of that, I hope that one of you pulls this blog out in a couple of months and says, “Hey Williams, time to eat some crow!”

It’d be great if Nelson was good enough to jump in and start on Sept. 2 against Northern Illinois, but I wouldn’t count on it.

I voted for Roosevelt Maggitt in the poll, although I’d probably label Neal as the leader at this point in time. The coaching staff always talks about how great Neal’s motor is. However, it is obvious that Maggitt is the more talented Cyclone. He’s got a lot more upside. But we all know that God-given talent doesn’t mean everything. Just ask Jesse Smith, a guy who was never supposed to sniff Jack Trice Stadium during meaningful times.

I want to be very clear about something here for a second. I’m not bagging on Rony Nelson here. I’ve never seen him play. I’m assuming that the majority of you haven’t either. I’m trying to lower expectations for a young man who has no Big 12 experience in his life, compared to a couple of guys who got some quality playing time last season. I hope Nelson proves me wrong. I’m just not going to bank on it.

Do you realize that Iowa State’s women’s basketball team went 2-1 against Final Four teams this season? Remember those big wins over Oklahoma and Baylor back during Big 12 play? The loss to UCONN eliminated the Cyclones from the NCAA Tournament but still, that number is pretty impressive.

READ THIS PIECE by the Ames Tribune’s Ben Goldsmith for more.

Toughest schedule in the Big 12

I posted this in our daily links section today but Randy Peterson of the Des Moines Register is pointing out that he believes Iowa State will have the toughest football schedule in the entire Big 12 Conference next season.

Randy makes some solid points. I’m going to work on a brief season preview with more on this later on this week.

This has to be one of the top sports days of 2010. The men’s college basketball season will wrap up tonight and it is Opening Day in Major League Baseball.

I’ll start with Butler and Duke.

Earlier today, I heard a member of our local media refer to Butler as the “ultimate Cinderella story.”

You see to me, that is just asinine. Butler was the 11th ranked team in America in the AP’s preseason college basketball poll.

A good story? Sure. Butler is a mid-major program with a head coach who looks like a law school freshman. It is an outstanding story.

But these guys are not a “Cinderella story.”

For the record, I am with most people on this one. I’ll pick Duke to win the game.

Coach K to the Nets? That’s the talk of the town today. I don’t buy it but it would certainly be an intriguing story? I hope that he does make the move. It’d give me a reason to care about the NBA heading into next season.

I don’t hate Duke like most people. I hate teams like West Virginia, Kansas State and Baylor. Coach K is one of the bright spots in this sport. I want guys like that to do well.

Duke’s basketball program actually reminds me a lot of Jeff Gordon in NASCAR. Think about how hated Gordon was 10 years ago. Why? Because he was winning Championships, had a hot wife and was rich. Gordon hasn’t won a Cup title since 2001. All of the sudden, the mere sight of him isn’t so sickening for racing fans.

The same goes with Duke in my opinion. The Blue Devils haven’t won a championship since 2001. When I was a kid, I despised that school. Now, they aren’t so bad. It’s because they haven’t been winning.

It’s also Opening Day in Major League Baseball. One of my goals in publishing CF is to develop a personal relationship with as many of you as possible. I love meeting knew people. There are almost 10,000 people who visit this site on a daily basis. I want to get to know as many of you as I possibly can.

In doing that, I want you all to know me as well. I’m more than just the “Cyclone guy.”

I watch other sports and have other interests. As many of you have learned, I have a significant passion for music by George Strait and Taylor Swift. Dorky? Probably. Is it me? You betcha.

So for the record, right now, I’m telling everybody that I am a diehard Atlanta Braves fan and I’ll probably write about them on our forums a lot this summer. I have loved the Braves since the 1991 World Series. I was seven at the time. But thanks to TBS and David Justice, the Braves sold me at a young age. For the record, I also root on the Kansas City Royals in the American League. They were my local team growing and also irrelevant so I give myself a mulligan to cheer on two franchises. If the Braves and the Royals were playing, I’d cheer on Atlanta without having to think about it.

We have some great baseball threads hopping on the website today.

Who is your favorite MLB team? Right now, it appears as if CF is a Cubs dominated site? Give us your input by CLICKING HERE.

What are your predictions for the 2010 season? Chime in on that question by CLICKING HERE.

Have a great Monday Fanatics.