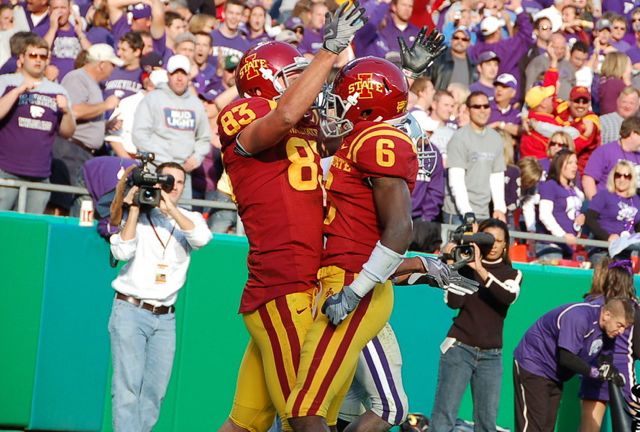 Maybe I’m the only one but I’m having a hard time making this transition into spring football. Maybe it’s that the disappointing basketball season is still talking but it’s pretty stupid for me to not get pumped up for the upcoming football season. I will admit that the ISU football segment on Miller & Deace on KXnO last week with Chris Williams filing in for Miller got me pretty excited—I just haven’t been able to fully dive into the football practice stuff. But now, the college basketball season is over, so let’s give it a shot.

It’s commonplace to discuss the top returning players from the previous year or the biggest area of need, but I’m going to take a different angle and talk about the in-between areas. The under the radar performers and position groups that everyone depends on, but don’t talk about enough.

• Ben LaMaak – The man of a million positions has yet another new one this year—center. He will have to fill the shoes of the anchor (Reggie Stephens) in what was a very improved line last season. He’s a smart and athletic player who should fill the role nicely. We’ll just have to see how the learning curve affects him.

• Jake Williams – The walk-on wide receiver just can’t get beat out. He blossomed in his role last season with nagging injuries affecting Darius Darks and Sedrick Johnson and a season ending leg injury for Darius Reynolds, but he certainly capitalized. Williams was a steady contributor that could well play a bigger role next season.

• Grant Mahoney – Kicker is one of the often forgotten positions, until you need them the most. Mahoney had a sub-par season last year, when he struggled for a few games with connecting on his extra points. A problem that was started by the blocked extra point against Kansas State that cost ISU the shot to win the game in OT. Mahoney has shown glimpses with some 50-yard field goals and his long streak of making extra points from his freshman to sophomore year. He should be solid coming into his third year on the job.

• Patrick Neal – His description is pretty much the same as Jake Williams. Neal stepped up big last year to fill in for the injured Rashawn Parker while playing opposite of Christopher Lyle. Everyone was waiting for the more heavily touted Roosevelt Maggit to beat him out. But the undersized walk-on from West Des Moines would not be denied, mostly due to a motor that just doesn’t quit.

• Ter’ran Benton – Benton seemed to just make plays last year. Benton will be a junior in 2010 and missed every game between the Nebraska game and Insight Bowl. He excelled in his role as the nickel back in a 4-2-5 defensive formation that was used much more often last year. The question for 2010 is do you leave him as the nickel back or give him his shot at corner back, as he is likely a leader for both jobs.

• Offensive Line – Let’s face it. This group is the most overlooked of just about any position group in any sport, but they really deserve the most credit. The line last year was a real pleasant surprise and its ability to create space for Alexander Robinson on the ground and protect the quarterback (especially the first 7 or 8 games when they lead the nation in fewest sacks given up). Iowa State ranked 21st in the nation last season only giving up 16 sacks on the year. Four of the five starters return and should be the makings of another solid offensive line.

• Kick Coverage – It was one of the most improved units for the Cyclone football team last season. Whether it was covering kickoffs or punts. The punt coverage unit ranked fourth in the nation, only yielding 35 yards on 16 returns out of a total of 66 punts on the season. The kickoff coverage unit ranked seventh in the nation, giving up an average of 18.11 yards per return. That is an astounding number, especially when you consider that only two of the 56 kickoffs on the season were touchbacks
.
• Opportunistic Defense – Just how opportunistic was the Cyclone defense in 2009? Consider this, they ranked 99th in the nation in total yards give up but 34th in the nation in scoring defense. How does that happen? Two ways, tightening up when the opponents get to the red zone and creating turnovers (ask Nebraska). ISU was ninth in the country with turnovers gained with an impressive number of 32.

I know I said I wasn’t going to mention the first rate returning players for ISU, but I can’t help but mention how good Alexander Robinson is…That is all.

• Luther Vandross passed on in 2005 so I’m not completely sure what spurned the change to use Jennifer Hudson, but "One Shining Moment" just wasn’t the same

• There’s something about Duke that’s easy to hate. Whether it be the pretentious fans, the over exposure, or the rich kid from the ‘burbs image. But my hatred was vaulted over the top tonight when they busted out the flat billed championship hats. That crossed the line.

• By the way, Reese Davis, it wasn’t Bobby Plum that won that state title for the Milan Indians (more famously known as the Hickory Huskers), it was Bobby Plump. C’mon man!

• I don’t know what the odds of Coach K going to the Nets really is but I’d have to imagine he has his sights somewhat set on passing Bobby Knight’s career win total, which should be within reach in the next few seasons.

• I don’t want to bag on Bob Huggins for his “moment” with Da’Sean Butler in their Final 4 game because I think it was genuine emotion of a coach caring for a player. That’s cool. That said, it was amazingly awkward.

Last week’s question: When was the last time ISU beat a team during the regular season that went on to participate in the Final 4? What was the year, the team, and fate of that team in the Final 4?

Answer: Kansas in 1993 lost to North Carolina in the national semi-final.

Outside the men’s room: Either or

Outside the men’s room: The winning way