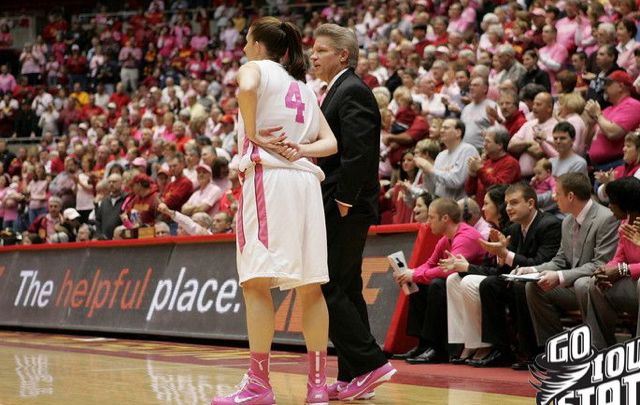 By Kirk Haaland, CycloneFanatic.com Fan Blogger To be honest, this is only an Iowa State topic because the Twister Sisters were the most recent victim of what is currently the most dominant team in all of sports. The most common analogy thrown out with the UCONN women’s basketball team is Tiger Woods, but that just doesn’t hold water. Has Tiger Woods ever had a 75 tournament win streak?

It’s true that he has been perhaps the most dominant golfer in the history of the sport and that he has brought unprecedented attention to the game, but he can be and has been beaten. The UCONN women have lost their fair share of games as well, just not this specific team. Not in the last 2.5 years at least. That’s extraordinary.

Competitors have stood toe-to-toe and competed with Tiger. This UCONN team hasn’t won a game by a slimmer margin than 12 points over the span of this win streak. But are dynasties in the best interest of the sport? For women’s college basketball, a massive win streak is a great way to increase exposure, no matter how one-sided that exposure turns out to be. But how many times do we really need to hear about Maya Moore and her Godforsaken drum set? And what is more important, exposure due to video game type dominance or competitive balance that over time would create more virtuous interest?

It should be noted that I don’t blame Geno Auriemma and the team he has assembled. He’s just doing his job by winning games. I don’t think he ran up the score on Sunday. That was more or less a 50-point game with 10 minutes remaining, when Tina Charles and Maya Moore were yanked from the game for good. In fact, I’m not sure they even spent more than four minutes on the court at the same time in the second half.

I do think the ISU women are better than 50 points worse than the Huskies, but ISU couldn’t make a shot and UCONN couldn’t miss a shot in the first half. Talk about a recipe for complete and utter disaster.

It’s great that the UCONN women are bringing attention to the game of women’s basketball that has probably never been seen before, but I don’t think it is what’s best for the overall good of the game. So what can be done about it? Some have suggested that it’s a matter of such high scholarship levels that allows the top teams in women’s basketball to hoard more talent, in order to create scholarship equity in accordance with Title IX (men’s basketball teams are allotted 13 scholarships while women’s teams are allotted 15). That could well be a contributing factor, but I don’t think it explains it all. There isn’t a salary cap that can be established (that would only be a plausible solution if John Calipari was a coach in the women’s game).

The dominance of UCONN may best be related to the very slight drop off of Tennessee in the past two years. They aren’t a competitive rival at this point for the Huskies. Much like UCLA in the 60’s and 70’s, this will probably just have to work itself out. At some point, the 11th-15th best players for UCONN will decide they’d rather play somewhere else than be the ones providing the pop and chips for their video game playing teammates.

I’ll admit it. When I received info after renewing my season tickets for men’s basketball about pre-ordering tickets for the women’s tournament, I opted out. I didn’t want to end up with tickets if ISU failed to qualify for the NCAA Tournament. Who would’ve thought this team would spend time in the top 15 and would have three of their eight losses come without their best player that could’ve easily propelled them to victory?

Had Alison Lacey been able to play, a better seed would have more than likely been garnered and a better draw against a weaker one seed or placement in the Kansas City region would’ve been earned. That said, even after watching that whoopin’, I still wouldn’t trade in the opportunity that our Cyclones had by playing the UCONN juggernaut. That was the opportunity of a lifetime that was the longest of long shots and just didn’t work out.

After watching countless pre-game, post-game, and interviews with Bill Fennelly and his talks to the team about what they should really focus on, I finally saw what he was preaching in actions from Alison Lacey and Denae Stuckey in the UCONN post-game press conference (not that it wasn’t always painfully obvious, but I tend to be dense at times). Fennelly often preaches to focus on representing Iowa State and its fans, while giving everything you’ve got. Hearing Lacey say how much fun she had on the court, while taking that beating on the scoreboard because it is always fun to play basketball and represent Iowa State was the best evidence for that I have ever seen. I don’t know if that approach by Fennelly would work in men’s basketball or football, but it is a message that obviously resonates with the women’s basketball team.

Tourney thoughts and other

• I wanted to discuss some things with spring football, but for whatever reason I haven’t been able to fully dive into that yet. Maybe it’s because the tourney is still going on, but my attentiveness to football has been limited.

• I went 0’fer with the Final 4 in my bracket; tell me I’m not the only one. Actually I know I’m not because about five out of the 15 people in my bracket also accomplished this amazing feat.

• If I’ve said it once I’ve said it a hundred times…Gordon Hayward is a phenomenal do-it-all player. He’s not the best shooter, best ball handler, biggest, tallest, or most athletic player but he does everything pretty well and has the intangibles and basketball smarts to make him great.

• Tom Izzo is just ridiculous. He was able to avoid the top three seeds in his region, nevertheless this Final 4 counts just as much as all of the others.

• There won’t be a chance for a brave reporter to ask John Calipari about finally making the Final 4, but I’m okay with that. Kentucky winning would’ve helped my wife’s chances to win my tourney pool but I don’t mind not having to watch John Wall, DeMarcus Cousins, or any of the other Wildcats dance anymore.

• Fran McCaffery. That’s a name we’ll be getting to know more and more. A name unknown to many, he seems like as good of coach as any by looking at the resume. Let’s face it though, its crap shoot no matter how you slice it.

This week’s question: When was the last time ISU beat a team during the regular season that went on to participate in the Final 4? What was the year, the team, and fate of that team in the Final 4? 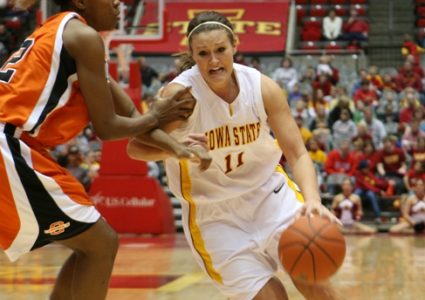 Outside the men’s room: Champs and challengers