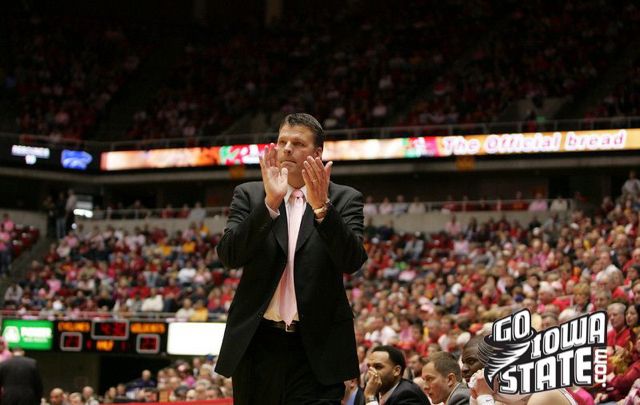 By Kirk Haaland, CycloneFanatic.com Fan Blogger It was a long time coming. Not only for Greg McDermott’s coaching tenure at ISU but for this year’s team in particular. All of those close games over the past two months that resulted in losses and frustrating experiences finally led to a win. As pointed out on 1460 KXNO’s Cyclone Soundoff after the game, the win felt a lot like the football game in Lincoln this past season. It was as unexpected as they come. The main difference being that the win for the football team was the difference between making a bowl game or not, while the win over KSU doesn’t have the same meaning. As was brought up on the call-in show with Chris, as exciting as the win was it also highlights the frustration with the season because of the fact it took so long to get a win like this. Quite honestly, wins like this are the reason that I can never walk away from a team. It’s like the 300-yard drive laced down the middle or sticking the eight iron close to the pin, wins like this keep fans coming back. At least they do for me.

As far as my thoughts on the game go, I really didn’t think it was much different than many of the other games that resulted in losses throughout the season. Crucial turnovers were made, easy shots were missed, silly fouls were committed, but most importantly plays were made with questionable officiating that lead to serious foul trouble and an unavailable Craig Brackins for the final seven minutes of the game. You’ll see some saying that they played “tougher”, in game adjustments were better, the substitution patterns were improved, or guard play was better. I don’t necessarily think any of that was bad, but I think it has been basically the same all year and especially in the past few weeks. It just looks a whole lot better when you get the win.

Steve Deace claimed Monday morning on the radio that this win cements the fact even more that McDermott should be gone. Claiming that it highlights just how much the team has under achieved thus far. I can’t completely disagree there, but the fact that you want to hold a win over a coach’s head is too counter-intuitive for me. Punishing a coach for a win?

I wanted to be able to compare this win to the home win over Kansas to wrap up the home schedule in 1999. That team returned its core and added a decent point guard in Jamaal Tinsley that following season, and the rest is history. But that comparison just doesn’t hold water. The win in Manhattan on Saturday was much more impressive. It was a road game against a top five team playing for a number one seed. That Kansas team in 1999 wasn’t ranked.

Hopefully the game this win does not compare to is the win over Nebraska on the football field in 1992. An enormous upset for sure but one that was parlayed into exactly nothing. An anomaly of epic proportions that never led to anything of any importance or performance that convinced anyone that the football program was making progress.

The first step into making this win worth something comes on Wednesday night against Texas. This season is about as lost as they come and has been full of disappointments but beating Texas could be the start of a spring board that propels this team into next year. Win a couple of games in Kansas City and keep our attention.

Mac will be back We’ve all heard the arguments about whether or not we believe McDermott can get it done at ISU. At this point, that is irrelevant to the discussion. He will be coming back for a fifth season no matter what you or I think. You’re also free to do as you wish with your money for next season if you’re tired of seasons like this one and need more convincing. That’s fine by me, but I can’t do that. I just can’t. I don’t think it’s enabling the administration as some radio personalities would suggest. It’s true that it doesn’t put the same pressure on the administration to make a change as giving up all monetary support would, but I don’t believe that a coach is only fired when the fans stop coming. Not only that, but giving up monetary support isn’t going to help that status of the program.

With as bad as Iowa is the Carver Hawkeye Arena reference gets brought up nearly daily now in comparison to what Hilton will look like if more failing seasons are on the horizon. I believe that could be a possibility. But the situations are very different. First of all, the apathy that is swirling through Iowa City didn’t start with the Lickliter era. It started with the Alford era. Not because his last teams were so bad but because he was such a pretentious jerk that nobody wanted to offer him much support. Secondly, basketball is to Iowa as football is to Iowa State. Iowa’s basketball fan base is much more fickle than Iowa State’s.

The email that Jamie Pollard sent out supporting McDermott came off a bit strange to me. I didn’t understand the format he used by explaining the athletic department successes while defending the basketball coach. He seemed to use the only tangible evidence to back his decision that he had on hand and that evidence was lacking any results from the basketball program. The “character and integrity” line that was used more than once is fine at surface value and certainly an important aspect. I just thought it was relied on too much as a cornerstone of the decision, at least by how the message was conveyed by Pollard.

I already harped on this on the message board, but the claim flat out bothers me. The decision to keep McDermott compared to firing McCarney was not hypocritical in the least. McCarney, like McDermott is a man of a high character, but to believe that McCarney should have been spared just as McDermott was because of that character is false because the economics of the decision are entirely different. The football program has to supply the AD with 80-90% of the revenue to keep the department running. If you’re not selling tickets for football season you’re going to drastically impact your bottom line in a very negative way. Men’s basketball is a profitable venture, but not nearly to the extent of football. Having a year where season ticket sales are down say 20% has a much, much smaller impact on the overall revenue of the athletic department. It is however very fair to say that it is a whole lot easier to fire a guy that you didn’t hire. The fact that even has to be said is just a tad bit scary.

That is without even mentioning the fact that the AD would be paying Greg McDermott $2.5 million to not coach. That isn’t a good investment. There is also plenty to be said about the men’s basketball program having the reputation of coaching turnover. I’m not saying that you stick to the status quo for no reason other than stability, but it is a factor. For a snapshot at that instability over the past 15 years consider this; since Donnell Bivens graduated in 1994 there has been one player that has played four years at ISU under the head coach that recruited him. That player? Clint Varley.

• Bill Fennelly considers Alison Lacey the Peyton Manning of the ISU women’s basketball team and despite the decent play in a few games without her this year, I’d have to agree. She needs to get well quickly for the Twister Sisters to have the Big 12 and NCAA tournaments that we have all been hoping.

• With all of the online media available on cyclones.com and so many other outlets, is it completely unreasonable to post the senior speech videos? Those are usually as entertaining as the game itself.

• The wrestlers couldn’t pull of the fourth conference championship in a row due to another lackluster showing in the finals. Only two of the six finals qualifiers were able to earn individual titles—Jake Varner and Dave Zabriskie.

• The interesting note from the Big 12 wrestling tournament was the huge swing at 184 for ISU. A quarterfinal overtime loss for Jerome Ward against Oklahoma State’s Clayton Foster. Ward went on to finish fifth and Foster went on to win the title.

• I’m just worried about the Texas game right now for the men’s basketball team in the Big 12 tournament but I really don’t mind the draw. I know many don’t like the Baylor match-up but I’m okay with it. Any of the top four seeds would be tough but if any of them has the propensity to not be fully prepared my money is on Scott Drew’s Baylor Bears.

Trivia time How many of Iowa State’s *8 road wins against ranked teams can you name from the top of your head? Year and team with bonus points for the opposing team’s ranking and for noting the games that were won in overtime.

*When I did the research I actually counted 9, but I have to believe that the ISU athletic department is better at this than me, so we’ll proceed as if it is 8. 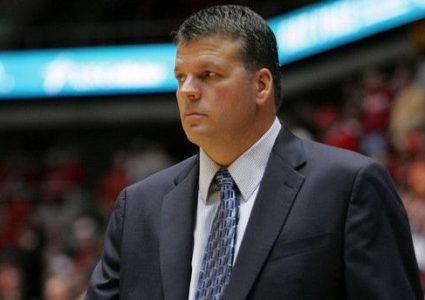 Outside the men’s room: A rock and a hard place