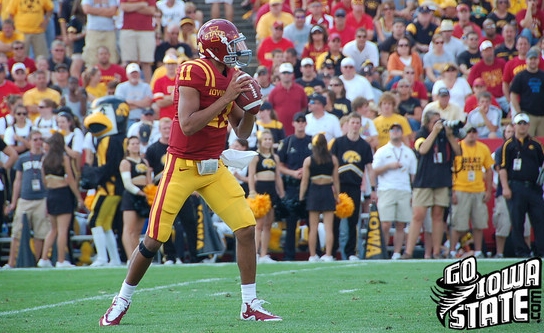 The slight chatter of a quarterback controversy during Iowa State’s 2010 spring football session was quickly put to rest on Monday afternoon. That’s when head football coach Paul Rhoads announced that sophomore Jerome Tiller’s knee injury will keep him out of contact drills for at least two weeks.

Though Tiller did participate in throwing exercises with the team on Monday afternoon, Rhoads said that his recovery from a knee scope would hinder his chances of knocking off senior Austen Arnaud for the top spot on the depth chart.

“I think that he was in a position to compete for the quarterback position,” Rhoads said. “Him being out now two weeks where he is missing a lot of team work, it will affect that quite a bit. Austen on the other hand, he is going to work to perform to the best of his ability without having that competition take place, which is a positive for him. I would much rather have Jerome out there for all 15 practices.”

Rhoads offered up a little more information on Tiller’s injury.

“He had his knee scoped,” Rhoads said. “When we were doing our testing right before spring break, he was broad jumping and tweaked it when he landed. He went on the squat rack and felt another piece of pain. They went in and tested it. They think that he probably already hurt it at that point so they had to go in and fix it.”

Right now, the plan is for Tiller to jump into practice full speed in two weeks.

Senior defensive end Rashawn Parker will not be participating in contact drills this spring after tearing his ACL against Army last season.

“He will go through drills and limited workouts with Coach Bray and the other defensive ends but he will not take part in any scrimmage or contact stuff,” Rhoads said.

On the defensive line, nose guard Bailey Johnson will miss and undeclared amount of time due to a broken foot that he suffered in the 2009 Insight Bowl. The current plan is to have him back by the conclusion of spring drills.

Also on the defensive line, red-shirt freshman Walter Woods is still out due to an ACL injury that he suffered last year.

And last but certainly not least, junior running back Bo Williams is currently recovering from a concussion that he suffered during offseason training.

VLOG: A look at the QB’s