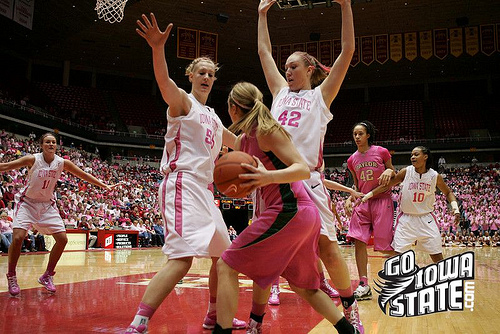 (Courtesy of Iowa State Athletic Communications…www.cyclones.com) LAWRENCE, Kan. – Iowa State senior Alison Lacey put the 15th-ranked Cyclones on her back every time needed her as she led them to a 57-54 win at Kansas Thursday night. It was Iowa State’s first win at Kansas in four years, as ISU improved to 21-5 overall and 9-4 in the Big 12, putting them in a tie for second place. Lacey led Iowa State with 22 points, while grabbing four rebounds and dishing five assists. Anna Prins has 12 points and Kelsey Bolte turned in nine, leaving her five points short of the 1,000-point mark. Denae Stuckey and Chelsea Poppens led ISU with seven rebounds each. Iowa State shot 36.8 percent form the field and went 6-for-22 from long range. Kansas shot 45.5 percent from the field and was 3-for-10 from outside the arc. The Cyclones won the battle of the boards, 33-30. KU had three players in double figures, led by Carolyn Davis’ 17 points. Monica Engleman had 15 and Sade Morris scored 14. Kansas dropped to 15-11 overall and 5-8 in the league. The Cyclones trailed 24-23 at the break after they got the ball on the final possession, ran the clock down, and Lacey drove in for the layup, but couldn’t get it to fall with just a second left in the half. Lacey was ISU’s leading scorer with eight points, while Prins had seven over the first 20 minutes. Neither team led by more than five points and the score was tied seven times in the opening stanza. Lacey scored to tie the game at 8-all with 14:49 left in the half and then the ISU offense went quiet, being held without a score for nearly four minutes, as KU got out to a 13-8 advantage. Prins scored five straight points, topped off by a three-pointer at the top of the key, to tie the game back at 13-all. The Kansas offense got stuck on 13 points for a five-minute stretch, but the Cyclones couldn’t capitalize. Kansas again led by five, 23-18, when Nicolette Smith drained a trey, but Kelsey Bolte got her first three-pointer to drop and Lacey scored to tie the game at 23-all. KU hit a free throw for the final score of the half. Iowa State shot 35.7 percent from the field and was 3-for-8 from outside the arc, while Kansas hit 42.9 percent from the floor and was 2-of-7 from long range. The two teams were tied, 15-all, on the glass. KU committed nine first-half turnovers, while ISU had seven miscues. The Cyclones took a 35-31 lead when Bolte got a steal under the ISU basket and Lacey was left wide open to nail a three-pointer with 14:41 to go in the game. ISU took a four-point lead twice more but Kansas found answers each time, getting a traditional three-point play and then an easy bucket in the paint by Davis to put the Jayhawks up one, 42-41, with seven and a half minutes to go. The lead went back and forth from there. Bolte hit another three-pointer to put ISU up 46-44, and Lacey hit a pair of free throws to give ISU a 48-47 edge with 4:10 left. Kansas got another easy basket in the paint and after the officials reversed a call, the Jayhawks got another traditional three-point play for a four-point margin, 52-48. Iowa State quickly answered as Lacey got her own traditional-three-point play and then found Amanda Zimmerman running the court after a rebound to score an easy two. Denae Stuckey finally got her first field goal to fall as ISU went up 55-52 with 1:20 to go. The Cyclones missed a shot with just under 30 seconds left and Kansas got the rebound. The Jayhawks ran down the clock looking for the final score, but Poppens picked off a pass in the game and KU was forced to foul Lacey with 6.5 ticks left. She calmly went to the line and drained two free throws to give ISU a three-point margin, 57-54. Engelman missed a three-pointer at the buzzer to give the Cyclones the win. Iowa State will return to Ames to play host to Kansas State Saturday at 7 p.m. at Hilton Coliseum. The game will be televised by Mediacom.