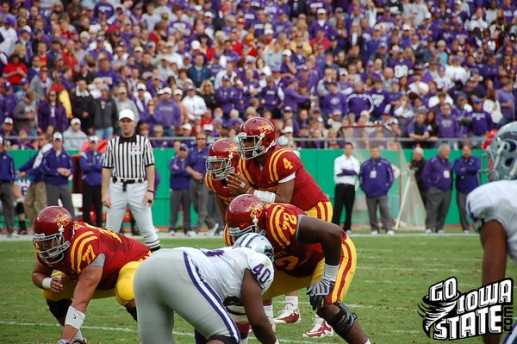 Here’s this week’s CycloneFanatic.com Big 12 Power Poll. As many of you do every single week, feel free to pick it apart and post your own.

1 – Texas – The Horns beat up on a struggling Kansas team on Saturday night. Texas now has two more hurdles before representing the conference in the BCS title game. I for one think that Texas A&M will give them a serious scare next week. We’ll see.

2 – Oklahoma State – The Buffs made our friends in Stillwater a little bit easy on Thursday night but hey, a win is a win right? Oklahoma State will meet Oklahoma this weekend. A win means a possible BCS game. That would be huge for Iowa State in multiple ways, the first being that the Cyclones would move up a spot in their bowl position. The second is big too. That’s a nice payday for the Big 12 Conference.

3 – Texas Tech – The Raiders picked up the most impressive Big 12 win of the weekend in my opinion when they routed Oklahoma 41-13 on Saturday. Mike Leach and Co. are now 7-4 overall with a 4-3 league mark.

4 – Nebraska – The Huskers are your Big 12 North champions, despite what happens in Boulder this Friday. The Huskers now rank 8th nationally in total defense.

5 – Oklahoma – Here’s a team that looked absolutely terrible on Saturday. I still think they’re the fifth best team in the league though.

6 – Missouri – After beating Iowa State by 10, it looks very likely that the Tigers will end the regular season with an 8-4 record.

8 – Kansas State – No bowl for the Wildcats. Honestly, I kind of feel sorry for the seniors on this team.

9 – Iowa State – The Cyclones finished 2009 6-6 and will likely be heading to a bowl game in Paul Rhoads’ first season. That is a major accomplishment. Rhoads needs to be rewarded with the Big 12’s Coach of the Year honor.

10 – Colorado – I give a lot of credit to Colorado nearly upsetting Oklahoma State last Thursday. With a coaching change likely on the way, there were plenty of reasons for the Buffs to not even show up for that contest.

11 – Kansas – Tough year for this team. Really, the entire season has been full of embarrassments. The whole basketball team vs. football team ordeal and now the Mark Mangino controversy. Kansas could beat Missouri next weekend in Kansas City. I could also grow a mullet. It doesn’t mean that I will.

12 – Baylor – The Bears are back where they belong. That’s in the cellar.

Texas @ Texas A&M (Thursday @ 7 p.m. on ESPN) – Again, I really think that this game is going to be close. A&M is 5-1 at home this season with their only loss coming to Oklahoma State by two on Oct. 10. Plus, this league is way too crazy for Texas to run the table without any problems.

Nebraska @ Colorado – (Friday @ 2:30 on ABC) – This is always one of my favorite games of the season. Throw the records out the window. Like the game above, I wouldn’t be surprised to see Colorado make Bo Pelini sweat.

Oklahoma State @ Oklahoma (Saturday @ 11:30 on FSN) – Iowa State’s bowl destination could be determined by the outcome of this football game. If you bleed the cardinal and gold, you better be wearing orange on Saturday.

Missouri vs. Kansas in Kansas City (Saturday @ 2:30 on ABC) – Bottom line, root for the Tigers. Like I wrote above, I don’t think KU is that big of a factor concerning the Cyclones.

Baylor vs. Texas Tech @ Cowboys Stadium in Arlington (Saturday @ 5 p.m. on FSN) – This one will get ugly.